The White Duck Taco Shop has some of the best tacos in town, with great locations on downtown off Pack Square, and on the French Broad River on the outskirts of the River Arts District. The restaurant, which is in an old quonset hut building, is casual dining with indoor and outdoor river side seating. 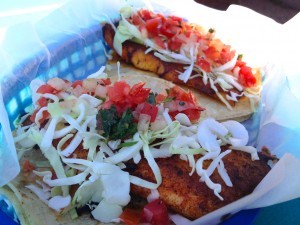 White Duck’s blackboard menu changes seasonally and features a plethora of creative tacos like the Maui Mahi (white fish, pineapple slaw, mango and BBQ aioli) and Shrimp & Grits (with cheddar, bacon, and smoked tomato jam). I went for lunch with my grandmother and though it was bustling, we were able to grab a picnic table outside and then we went inside to order at the counter. This time I tried the Baja Taco with cod, pico de gallo, slaw and crema. My grandmother chose the Steak and Cheese with lettuce and pico de gallo and we shared the three salsas and chips (smoked chipotle, green tomatillo, and a creamy red tomato).  My tacos were delicious and I can tell you there wasn’t much chatter between the two of us for the first few minutes after we were served which I think is always a good sign. My grandmother said her steak and cheese tacos were tasty and filling. Other popular picks include Bangkok Shrimp Taco and BBQ Carnitas. There are several other restaurants in Asheville that serve fish tacos but I appreciate the creative spin that White Duck puts on their dishes. 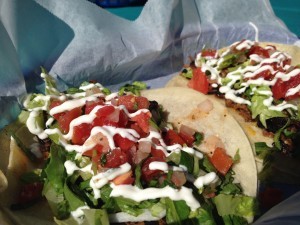 Whenever I come here I always get the feeling that I am in good company, lots of locals that are loyal to the White Duck. 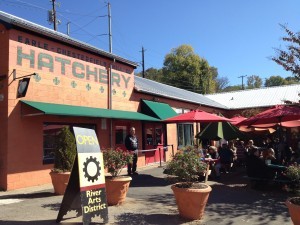 Our Rating: $ and consistently good.