I always visit a restaurant at least twice before sharing my thoughts on the food, and my trip to Rhubarb Restaurant in downtown Asheville last night was my second, this month. I figure in two visits I can sample at least 4 entrees and 4 appetizers, and maybe 4 cocktails – enough food to be fair in an opinion. 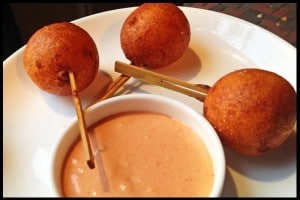 Experience says a restaurant is either great, good or average (terrible doesn’t last very long), and all things being equal, it doesn’t change much. Unless there’s a change of ownership/management/chef, in which case all bets are off. And what I see most often in that regard is food that is good but was once great, and average that was at one time good. But anyone can have an off night, and any dish can taste different the second time you try it, which is why two trips at minimum is a must. 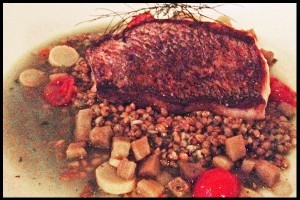 Rhubarb, without a doubt, is great food. Sublime food, as good as you can get in Asheville and probably the best of its style of cuisine. Chef/owner John Fleer is nationally recognized and honored, just Google him if you want a history of his accomplishments with food. His second restaurant, Rhubarb, follows the “farm to table” movement of seasonally selected food that is locally sourced, and prepared with classic European and American cooking techniques. A movement, as it happens, he was influential in helping start decades ago.

What I love about the dishes I’ve eaten at Rhubarb are the simplicity of the ingredients and the complexity of the flavors, and how I can distinguish every individual flavor in each bite, not one over-powering any other. In each bite of my Seared Red Snapper I could taste both the earth and ocean in the seared fish, the heartiness of the perfectly cooked farro, and the clean and delicate flavors of the corn and pepper succotash. And all the flavors above were basted in the most delicate, translucent green sauce. I have never had a better fish dish. Hands down.

From the Snacks & Shares side of the menu I’ve eaten the Lobster Corn Dogs (twice), Summer Vegetable Crostata, Heritage Pork Meatballs and the Roasted Beet Salad. The Lobster Corn Dogs are the perfect example of a dish tasting different, better, the second time I ate it. It being called a “corn dog”, my expectations the first time I tried it were very different from what I tasted, and I think that incongruity influenced the way I experienced the dish. The second time around was remarkably different, and I was able to appreciate subtle flavors that went unnoticed the first time.

My only disappointment in the two times I’ve eaten at Rhubarb was the dessert on my last visit – the Looking Glass Goat Cheese Pudding Cake – and not because of how it tasted. It was fantastic, and I’m now a huge fan of Muscatel grapes. But it was RIDICULOUSLY small, no exaggeration. And because we shared, it was literally ONE BITE for me and ONE BITE for Miss K – TWO BITES total. As you can see from the picture, each bite was the size of…… a pecan nut! I’ve never been a fan of gorging on giant portions of food, especially dessert, but the size of this dish reminded me what you might see in a TV commercial or scene from a movie making fun of Nouvelle Cuisine – tiny portions of expensive food on a giant plate.

In retrospect I should have said something. I feel that jipped. And frankly, I feel kind of disrespected and a little foolish for spending the $8. Just one more PECAN SIZED piece of cake and I might not feel this way (it wouldn’t take much). I don’t know that I would order dessert at Rhubarb again. But I will certainly enjoy their food again, anytime, and I’m looking forward to trying everything on the menu. Come stay with us at Asia Bed and Breakfast Spa and dine at Rhubarb. They are closed Tuesdays. 828.785.1503

Our Rating: $$$ and second to none