Wicked Weed opened its doors a year and a half ago to great anticipation, and by all measures it has not disappointed. Back in 2012, I wondered, every time I passed it, what would become of the former Asheville Hardware Building on 91 Biltmore Avenue. Then one day construction started, and in a blink, Wicked Weed was born. 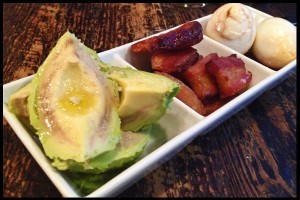 Little did I know that its modest, low slung exterior belied a giant space, large enough for an eatery upstairs and a spacious, airy indoor-outdoor brewery/beer garden space on the ground level. Design, sophistication, scale… no other brew pub in the downtown area comes close. And for good reason: it’s a well-heeled operation with a lot of talent.

Wicked Weed is Asheville’s craft beer juggernaut, and the newly minted brewery won its first Gold Medal at the 2013 Great American Beerfest – the first brewery in Asheville to ever do it. Its success has spawned a second downtown location and tasting room on Coxe Avenue called the Funkatorium, which will feature barrel-aged sour beers, and a new 40,000 foot production facility in Candler to open in 2015.

If you plan on visiting the Biltmore Avenue location, prepare to get their early in the evening. Or go for lunch, because on any given weekend the place is packed, and the wait to get in can be more than an hour. Wicked Weed is wildly popular with locals, visitors and beer fans, and that’s a testament to the beer they brew. 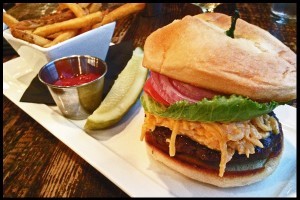 For the record, I am not a beer freak. I enjoy a beer with my meal, and one when it’s hot out. But I’ve tried many of the beers brewed in Asheville, and as far as IPAs go, Wicked Weed’s Freak of Nature Double IPA is by far the best I’ve tasted. There’s not another local IPA in the running.

I’m also not a self-proclaimed “foodie.” I like the endless bowl of salad at the Olive Garden as much as the Iberico ham I’ve had at Curate, which is among the best things I have ever put in my mouth. But I’ve eaten enough good food over the years, and I’ve done a lot more cooking than most, that I can say with some confidence that my palette is… attuned to good food and good flavors.

Wicked Weed’s food is what you’d expect for a brew-pub: there are good dishes and so-so ones. The menu has a lot of interesting ideas, but the execution of the dishes I’ve tasted is not up to the standard of really great food in Asheville, most being either over-flavored or under-flavored. There are certainly stand-out dishes that I’ve not been fortunate enough to have selected.

Their Sweet Tea marinated egg – thick but bacon – salted avocado appetizer was so tasteless and uninspired (the egg almost inedible) that I probably should have sent it back. Draw your own conclusions, but mine is this: definitely come for the beer and atmosphere, and while you’re at it, be smart and put something in your stomach; even if you’re not likely to write home about it. Come stay with us at Asia Bed and Breakfast Spa— Wicked Weed is a four minute drive away!