Pack’s Tavern is a gastro pub and taproom in downtown Asheville, ideally located in the center of town on Pack Square Park and just a stones throw from City Hall and the County Courthouse. It’s a cavernous building that has lived many lives, including an auto parts store, lumber purveyor, and gateway for illegal liquor during prohibition. But for the last 4 years it’s been serving up craft beers and good food, in a beautiful and lovingly restored space. 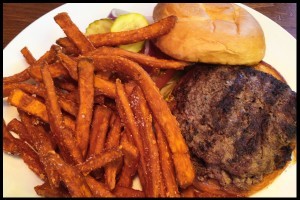 What I like most about Pack’s Tavern is its accessibility. When downtown gets crowded, and all the other restaurants are packed, there always seems to be a seat at Pack’s. It’s also one of only two places I would recommend watching a game in town. 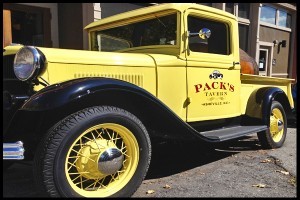 I’ve tried about a half dozen different items on the menu and I’ve never been disappointed, and today was no different. I was fortunate enough to enjoy the company of Miss K, who was dying to try their Carolina raised Bison Burger. I was craving a burger too, and was licking my lips for my favorite burger on the menu, the Mount Mitchell.

The Mount Mitchell is 100% angus beef, served on a fresh baked brioche roll, topped with cheddar and swiss cheese, bacon, a fried green tomato and a fried egg. It’s fantastic, hearty with great flavor, and it’s a manageable size, which I appreciate. All burgers come with a choice of side: fries, sweet potato fries, mashed potatoes, tomato salad, potato salad or chips.
There’s something for everyone on the menu at Pack’s Tavern, and the restaurant follows in the tradition of taproom/gastro-pubs that have opened in downtown Asheville in the last 4 years, not unlike LAB and Wicked Weed. And though Pack’s doesn’t brew its own beer, it does stock over 50 craft beers either on tap or in bottle, which is more than most other places in town.

So, if you’re wandering downtown looking for a decent place to eat, and you don’t have a reservation or time to waste waiting, make a bee line to Pack Square and look for the yellow 1932 Ford pickup parked outside. Come stay with us at Asia Bed and Breakfast Spa and enjoy a quick 5 minute drive to Packs.  20 S Spruce St, Asheville, NC 28801. Open Daily 11am-12am. (828) 225-6944

Our Rating: Between $ and $$ and consistently good